DONAGHADEE’s Lifeboat Saxon went to the rescue of a ferry passenger after a medical emergency aboard the Belfast-Liverpool Stena Mersey early on Monday morning.

The sun was rising as the crew launched at 4.29am following reports that a woman had been taken ill and needed hospital treatment. The ferry was two hours from Belfast but only a few miles offshore from the Royal National Lifeboat Institution station.

The casualty was lowered from a hull door of the ferry to the deck of the Saxon and an ambulance crew was waiting to take her for treatment by the time the Lifeboat was back in harbour at 5.45am.

RNLI operations manager Peter Irwin said, “Casualty care forms a major part of the crew’s training and this operation went extremely well in flat calm conditions. We hope the lady makes a swift and full recovery and are glad we were able to help get her to hospital as quickly as possible.”

It is one of the busiest years on record for Donaghadee RNLI with 16 ‘Shouts’ so far this year. The Lifeboat launched on Saturday after reports of two people in difficulties in the water at Millisle but was stood down after the incident was resolved without the crew’s assistance and on Sunday the volunteers were at sea for an exercise on Father’s Day. 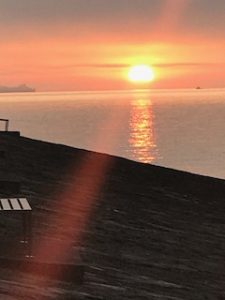 Donaghadee Lifeboat Saxon makes its way to the Stena Mersey as the sun comes up in the North Channel. 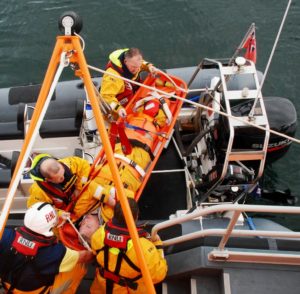 Casualty care forms a major part of the training regime for the RNLI volunteers.