THE RNLI is calling on the people of Ards and North Down to support lifeboat crews as Mayday, the charity’s national annual fundraising campaign, is launched. Beginning on Monday May 1, and running for the whole month of May, the Mayday campaign asks people to ‘do their bit, fund our kit’. The charity hopes to raise £750,000 to fund lifejackets, helmets and the RNLI’s iconic yellow wellies. It costs £1,593 to equip every Donaghadee crew member.

Mark Nelson  regularly gives up valuable family time to train and go to sea in emergency situations. He said: “Crew members are willing to drop everything to go and save lives at sea when their pagers beep. Our lifeboat crew kit is absolutely vital when we’re out in all weathers.There are 17 of us and this year we have launched five times including during a Force 8 gale last Monday when we were asked to help find a lost child in Bangor. The Mayday campaign is our own call for help and we’re asking people to do their bit to fund our kit throughout May.There are all sorts of ways to raise money for Mayday. From wearing wellies to work or doing a sponsored welly walk, to holding a bake sale or doing a sponsored cycle ride. Anyone can register for a free fundraising pack by visiting RNLI.org/Mayday.”

Donaghadee’s RNLI shop sells the teddy bear mascot which joins crew members aboard the Donaghadee Lifeboat every time it puts to sea. Operations manager Peter Irwin said: “Saxon is a vital member of the crew and helps keep our spirits up when the going gets tough but his friends need a loving home. You can show your support on Buy-a-Bear Day this Monday.” 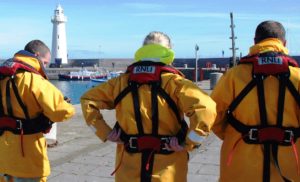 Lifejackets on: The crew prepare for launch last Sunday. 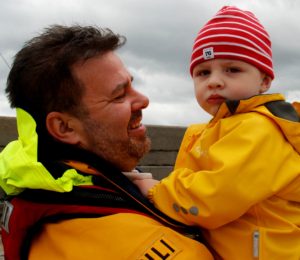 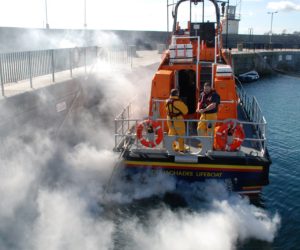 Smoke on the water: the Lifeboat’s engines roar into life. 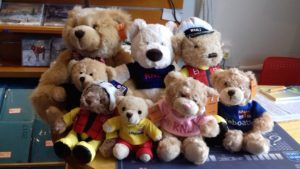 Ready, Teddy, Go! Buy a Bear day on Monday will help with the cost of the crew’s safety gear.